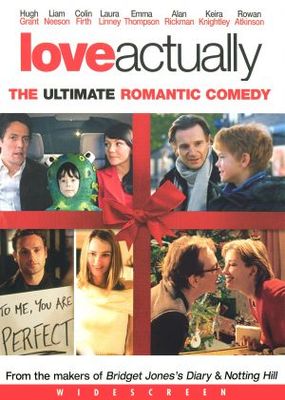 Love Actually is not the film I imagined it to be. I guess you can call it a romantic comedy and it seemed like a sensible film to watch on New Year’s Day. The cinema was packed which suggests we wen’t the only ones with that idea.
I should say from the beginning, it’s sentimental and feel-good. If those words put you off then you shouldn’t really see this film. I do think, however, that if you have ever (even once) got a little lovey-dovey then could go and see this movie and get something out of it.

It’s weaves a whole stack of separate stories together about people in love or finding love (and even out of love) with the backdrop of Christmas in London. Richard Curtis (of Four Weddings And A Funeral fame) makes his directorial debut and provides a very well-shot image of 21st Century London at Christmas. There are some really well-done sequences around the city which gives somebody like me – who thinks he’s seen all he wants to of London – something to smile at.

Having said it’s well-shot it is not without problems. Too many stories are intertwined leaving too many questions unanswered. When you leave a cinema questioning some of your understanding about who was who and where things were set you know that at some point this film failed. Why have the whole Wisconsin sequence, for example? And what happened to the Laura Linney parts – I suspect there is something on a cutting room floor that explains all that somewhere.

But don’t let that put you off. Liam Neeson’s storyline is great (even if it stretched believability a little), Emma Thompson is superb (and you will feel for her as she opens a Christmas present) as Alan Rickman‘s wife (he too stands out with a great, typical Rickman performance). Even Hugh Grant is believable as a Prime Minister who falls for his tea lady (Martine McCutcheon).

What I liked, although I have no idea if they will translate to the US, are the really British touches. Ant and Dec are the kid’s TV presenters; Jo Wiley is a DJ and Wes Butters does the chart run down for the Christmas Number One. And there wasn’t an over abundance of red London busses – which must be a first for British films.

This is really an inoffensive, somewhat amusing, light-hearted, feel-good British comedy and I hope it does well. If you read the message boards over at the Internet Movie Database you’ll read about people walking out in shock and disgust – which, if you’ve seen the film, is just as amusing.