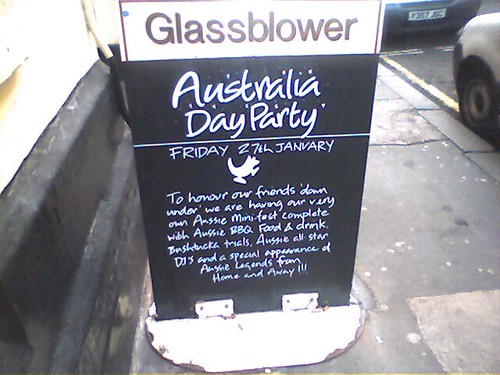 What fun. Walking round central London this morning I see that we are getting into the spirit of Australia Day too – although The Glassblower is off by 24 hours and probably the same number of degrees colder.

From Flickr: Today is the day all Australian’s celebrate ‘what’s great‘ about their country: Australia Day. Central London appears to be celebrating tomorrow. Shame it won’t be the as warm with an ‘Aussie BBQ’ on the beach. Now, if Gordon Brown gets his way, can I be in Sydney when they celebrate British Day?

So, who’s going to be the Home & Away special appearance?

Jase doesn’t post as much as he used to but he has some gems in his random links section. My favourite right now is the Google Usenet Timelime which is fascinating on two fronts: firstly because it’s a piece of history and secondly for the selections they have made – the announcement of the web; Britney Spears and the first piece of spam. [via Jase Wells]

It looks like public transport around London will be my theme of the week. On Friday, we had motorway pile-ups and traffic queues for more than twenty miles. Yesterday, a tube train crashed on the Central line [BBC News] which, I suspect, means one of the main routes into London will be closed for weeks. Reuters is reporting that London Underground bosses have also suspended services on the Waterloo and City line which, apparently, uses the same trains.

I haven’t spoken to anybody else about this, but I wonder what Londoners think of tube safety? Despite the King’s Cross fire (which was at the station and not on the trains) and an incident at Moorgate many years ago, there haven’t been that many major incidents on the Underground. I think, subconsciously, I understood this for I have never once (in ten years of using the system) felt unsafe as a result of the riding the trains. I’ve felt uncomfortable with the heat and the lack of fresh air. I’ve felt ill in the commuter crush when it’s almost impossible to move on a train. Even the claims of under-investment haven’t made me stop to think about the safety of the system. Now, especially having read accounts posted online by those on the train that crashed, I will think again.